The challenge of acceptance

What does “acceptance” mean? It is a word that has many different meanings, angles and approaches from many viewpoints including, but not only restricted to religion, cultural, legal, community and person stances. Acceptance is also a word that is often misused and misrepresented within the stuttering community who seems to follow no consistent definition amongst its ranks. Broadly speaking for example, acceptance is sometimes used by those who stutter to mean that they are at peace with their level of fluency and stuttering behaviours.  Perhaps no longer wishing to work on it in terms of therapy or some type of speech-shaping or management programme. But in that case we are really talking about self-acceptance.  For some other people who stutter acceptance means simply ‘giving up’ on trying to take control of your speech and in turn become a person who does not stutter (at least while using technique) viewing stuttering very much as a deficit. By observing discussions in various stuttering groups on social media we can illustrate that these people who portray a closed and negative view of acceptance have usually undergone some form of intensive program(s) to help manage their stuttering successfully or not, and generally fall into four broad camps of people and combinations of:

Perhaps the opposite of ‘acceptance’ is to accept stuttering as a stigma? This would appear to be a very difficult position to come from. If stuttering is accepted by people who stutter as a stigma and seen as something that needs correction, then it is being seen as a personal deficit rather than as an inherent attribute, forming an inherent part of our essential ‘humanness’. Why would we allow ourselves to be placed in a position where stuttering is allowed to be seen as anything different to having red hair or blue eyes or even freckles? Amongst our own ranks we often argue and complain that society has a negative and incorrect view of stuttering. Yet perhaps we are feeding the fire of ignorance ourselves.  Goffman (1990) provides a theoretical basis to begin understanding stigma.

….an individual who might have been received easily in ordinary social intercourse possesses a trait that can obtrude itself upon attention and turn those of us whom he meets away from him, breaking the claim that his other attributes have on us. he possesses a stigma, an undesired differentness from what we had anticipated. We and those who do not depart negatively from that particular issue I shall call the normals.

The attributes we normals have towards a person with a stigma, and the actions we take in regard to him, are well known, since these responses are what benevolent social action is designed to soften and ameliorate. By definition, of course, we believe the person with a stigma is not quite human (p.15).

Are we then prepared to accept that having a stutter renders us not quite human? By positioning it as something that requires correction we are buying into this societal obsession with the normal, made manifest by the normals, and allowing stutterers to be cast out rather than accepted? To be ‘othered’ rather than included? Amongst our ranks then we are tending to perhaps dehumanise ourselves.

Freire (2007) makes an interesting point about the relationship between oppressor and the oppressed.

Submerged in reality, the oppressed cannot perceive clearly the “order” which serves the interests of the oppressors whose image they have internalized.  Chafing under the restrictions of this order they often manifest a type of horizontal violence, striking out at their own comrades for the pettiest reasons…..on the other hand, at a certain point in their existential experience the oppressed feel an irresistible attraction towards the oppressors and their way of life.  Sharing this way of life becomes an overpowering aspiration.  In their alienation, the oppressed want at any cost to resemble their oppressors, to imitate them, to follow them (p.62).

Isn’t the desire for correction of a ‘stigmatising’ difference, inherently a part of who we are, perpetuating some form of horizontal violence? Perhaps the heart of the call for acceptance lies in what Goffman (1990) sees as a language of relationships rather than attributes (p.13). Perhaps it is through a relational understanding of each other as people, without a self-conscious internal, or internalised, focus on an arbitrary attribute. A relational expression of our humanity, to other human beings, may be a more effective foil to stigma than correction.

But what should acceptance globally mean to the larger community of people who stutter? A community that like many others is fragmented by diversity of opinion on many topics. For without acceptance within its own ranks it will be very hard for a global unified stuttering movement to successfully occur. We are already seeing a wide range  of different opinions and views about stuttering being spread into popular media. These splintered views alone are causing misunderstandings about stuttering and related treatments to occur amongst the general population.

To begin to understand what acceptance should mean for people who stutter it became obvious that there are literally thousands of different views, interpretations and quotes.  The Oxford Dictionary online however offers a very simple definition. But perhaps a simple definition is all that is required? Surely as a community we do not want to be rutted down into accepting a common definition of acceptance. The Oxford Dictionary online defines the noun of acceptance as:

“The process or fact of being received as adequate, valid, or suitable” (Oxford University Press).

A definition which by its simple message is focused on community acceptance. Surely what we all want is to be seen as being fit and able enough to run with the pack? Surely regardless of whatever stance we individually take on stuttering we should still be made to feel “adequate, valid, or suitable” amongst the people that we share a common bonding situation with. That situation is stuttering. Like it or not, technique or not, believing stuttering is a deficit or not, we are all people who stutter.

But beyond the acceptance of the pack is the acceptance from within. For surely as a result of community acceptance then personal acceptance will follow and flourish. We think Van Breeman sums it up perfectly in the following passage:

Surely above all we want to be accepted by our own communities and with such acceptance ,comes community pride and strength. Acceptance should never be viewed as a weakness or deficit itself. It is a directed and informed personal choice summed up perfectly by the quote below. 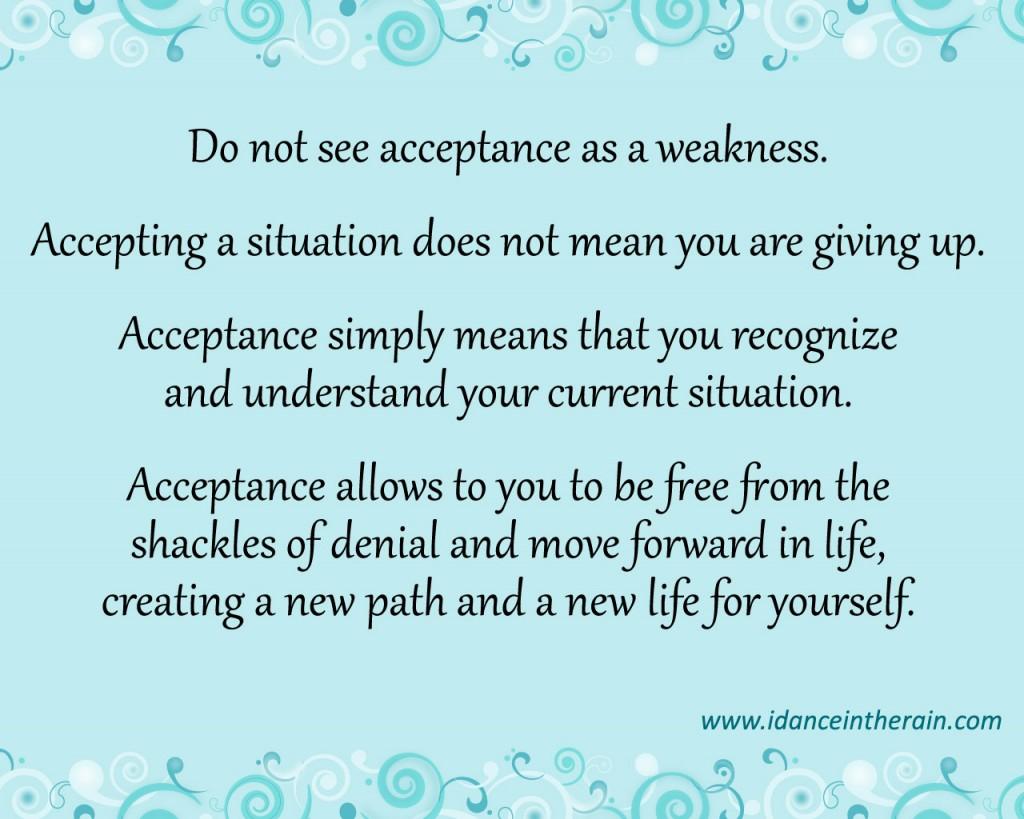 “The process or fact of being received as adequate, valid, or suitable” (Oxford University Press).

Is it this simple to globally define acceptance for the stuttering community? We believe so. As part of the stuttering community we will see other people who stutter as being adequate, valid, or suitable to be amongst us. No matter your: beliefs about stuttering and its affects;  your decisions to use speech management and shaping techniques; your decisions not to use speech management and shaping techniques ; your beliefs in the origin of stuttering; the severity of your stuttering; how long you block for; in reality anything you do about your stuttering and believe it to be. We as a community welcome and “accept”  you for being who you are and for being a person who stutters.

There is a global movement in the early stages of forming within the stuttering community and that is of “Stuttering Pride”. This movement revolves simply around the notions that it is ok to stutter and that a person who stutters should take pride within themselves about their speech. In a sense viewing stuttering as a human experience and not as a disability or deficit. Viewing stuttering as an experience that all of us who stutter share and are united by. But for this to truly happen with a united strength, then acceptance of different viewpoints within the stuttering community must occur. But is takes courage to accept acceptance and it will take time for this courage to evolve throughout the stuttering community. It does not take a rocket scientist to understand that stuttering is not illegal and that it should not be treated in that regard, especially by people who stutter themselves. This push in no ways discourages people who stutter from seeking treatment and assistance. It is the opposite, the movement accepts your own personal journey and the fact of the matter that no matter how successful your treatment or programme is for you, you are still a person who stutters and you are still one of the greater community of people who stutter. With unification comes community and with community comes culture. Isn’t it about time that we start to discuss and evolve towards more of a stuttering culture?

So the call is now being put forward to all who stutter. For too long our ranks been splintered with anger, arrogance and blinkered views.

So the call is out. Who will?:

The time for unification is now and with unification will come greater global pushes for stuttering awareness and education. Stand up with pride and offer the world authentic stuttering stories and views.  To encapsulate the meaning of acceptance and the rise of stuttering pride the following creed has been devised:

This is my stutter. There are many stutters like it, but this stutter is mine.
My stutter does not define me, but it is a part of who I am.
I must master my stutter, as I must master my life.
I will not let it control me or my destiny. Nor will I use it as an excuse not to succeed.
I will feel no shame by stuttering, nor anger at myself doing so.
Other people who stutter may have different opinions about stuttering.
I may not believe in these views, but I will appreciate their opinions.
I will not stand in the way of their personal journeys. But I will not promote those which I disagree with, find fraudulent or untrue.
Without me my stutter is useless. I am its master and together we shall thrive.

Goffman (1990). Stigma: Notes on the management of a spoiled identity. London: Penguin