“How do we recognise the shackles that tradition has placed on us?
For if we can recognise them, we are able to break them.”

Our thinking is often limited by the dominant discourses and narratives circulating within the societies we inhabit. The words we use are never innocent; they have histories. Every word expresses a particular perspective, value or preference as our language is wrapped up in culture and comes with contextual baggage. Discussing stuttering and fluency, for example, is never separate from an ableist view of human communication (St. Pierre, 2012). This view posits an idealised way of speaking and suggests that those who speak differently are flawed in some way. Within this context, stuttering is defined as the negative opposite of fluency. It is taken for granted that fluency is desirable and stuttering by implication is not and should be fixed.

Through repetition, these discourses start to take on the veneer of common sense. It becomes harder and harder to think outside of these boundaries. Fortunately, art can act as a friction against this discursive momentum. By allowing us to see, hear, feel, and think about stuttering differently, art can identify, challenge, and alter the baggage that accompanies our everyday language. Auditory, tactile, and visual art can accomplish this by doing away with language altogether. A picture is worth a thousand words, preciously because it does not use any. Language-based art, such as poetry and prose, still use language, but in new and exciting ways. They often make glaring our prejudices and biases and in doing so manage to free our words from their historical chains.

Three exciting examples of art that we have encountered that powerfully demonstrate the new and changing ways in which stuttering is being represented are:

Erin Schick’s poem ‘Honest Speech’ (2014) is a powerful, breath-taking exploration of her stuttered voice. In this medium, Erin can combine elegant language with her angry, empowered stuttered speech. Each word leaves a deep impression on the listener. When Erin explains “T-This is what I sound like when I speak for myself. This is what I sound like” the audience does not just hear the phrase; they feel it. The art form enables her message to go beyond the negative baggage of spoken language and asks the listener to re-interpret her stutter with new ideas and new meanings of authenticity. The artistic medium allows Erin to express her experience of reclaiming her dysfluency from society in a way that fluent language could not provide. 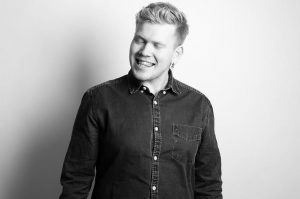 Photographs of moments of stuttering by Alda Villiljos and Sveinn Kristjánsson

In 2016 Alda Villiljos and Sveinn Kristjánsson, two Icelandic artists, undertook a photograph project, which aimed to capture and celebrate the personal and often unique tics and movements associated with moments of stuttering. People who stutter all too often feel self-conscious about these physical expressions, however this project sets out to represent them through a series of strikingly beautiful black and white still images. Villiljos and Kristjánsson argue that such representation is an important means of promoting stuttering awareness and affirming the unique experience of 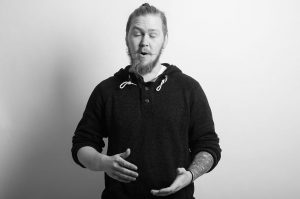 stuttering. These bold still images directly challenge perceived notions of dysfluent speech production as ugly or unattractive. Capturing individual variations of tongue, lip, face, eye and body movements in this way highlights the potential for people to learn to take pleasure in their speech, no matter its form, and challenges people who stutter to develop and celebrate their very own stuttering aesthetic. 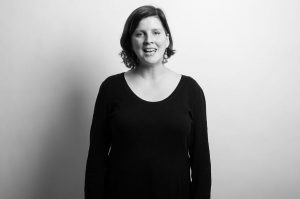 The Stammer Band at the Manchester British Stammering Association Conference 2016

Stuttering has a long history in music. At the Manchester British Stammering Association (BSA) conference, only a few short weeks ago, this history was celebrated. A ‘one-night-only’ band, composed entirely of people who stutter, played out an electric mix of songs related to stuttering. The night featured rock anthems, such as ‘My Generation’ by The Who and ‘You Ain’t Seen Nothing Yet’ by Bachman-Turner Overdrive, that employ stuttering to generate tension and introduce unpredictability. Stuttering is not negative in this context; indeed, these repeated staccato syllables are desirable and the songs are much better for them. The widespread positive use of stuttering in music invites us to explore how sometimes our own dysfluencies can be a source of inspiration in our voice rather than a detractor.

A further example of this is Scatman John’s original songs and unique style ‘scat-rap’, which would never have come about if not for his stutter. In his obituary, Scatman John is quoted as saying “Scatting gave me a way to stutter freely. I’m a star not although I stutter, but because I stutter. Stuttering has paid off!” Although Scatman John’s life was made more challenging and traumatic because of his stutter, music gave Scatman John a way to celebrate and harness his stuttering as a benefit, enabling him to break away from socially-conceived norms.

An important feature of art is its potential to be both challenging and accessible. You do not need an advanced degree to be moved by a dance performance or to be galvanized by a painting. In a similar way, we (Chris, Sam and Patrick) are currently editing a book that will attempt to present the social model of disability and stuttering pride in an accessible way. There is a growing movement within the stuttering community away from the entrenched and ingrained negative framing of stuttering towards the carving out of a stutter-positive position. For instance, an upcoming one day conference in London on 3rd November entitled ‘Stammering: Pride and Prejudice’ hosted by CityLit will bring together a host of speakers to debate and discuss the implications of stammering pride on speech and language therapy (both people who stammer and speech and language therapists are welcome to attend!). Increasingly, the social model of disability and other theories from disability studies are being used in order to make new meanings of our experiences and inform speech therapy. The aim of our book is to present these ideas in short, easy-to-understand chapters as the book will not be written for an academic audience, but for people who stutter themselves. The themes the book will explore are:

In addition to personal and reflective pieces of writing, we would like to include works of art by people who stutter of all ages that aim to reframe stuttering in positive terms. This could include pictures, photographs, poems, comic strips, short stories, or anything else you can think of. If you have a piece of art that pertains to any of these topics, especially stuttering pride and prejudice, or if you would like to create an original work that explores any of these topics, then please contact us at stammeringprideandprejudice@gmail.com. Alternatively, we are planning to tweet under the hashtag #p-p-p-pride and invite you to do the same. We look forward to hearing from you!

Photographs of people who stutter: http://www.boredpanda.com/i-photographed-peoples-stutters/ Photographs © 2016, images used with the permission of Sveinn Kristjánsson

To attend the Stammering: Pride and Prejudice conference please go to https://www.stammering.org/get-involved/events/stammering-pride-and-prejudice-one-day-conference