We represent the Speech Therapy Center “Arliliya” which successfully engages in stuttering treatment. Dear Keith Boss, past Chair of the ISA Board, visited our organization and is familiar with our results.

We would like to introduce you to our new successful development of a technique previously researched by others between 1910 and 1960. This original research of ours has allowed us to increase significantly the effectiveness of the treatment.

As you will see from our Bios, we have been involved in stuttering and scientific research for many years. We know the problems people who stutter (PWS) have in their lives.  We know that PWS who live their lives to the full deserve our respect and admiration. We know they have a quiet dignity to help them to continue. They need recognition for rising above their disability. But there are PWS who are unable to cope as well. We have seen this in many of our patients. As we developed and improved the effectiveness of our unique technique, we observed patient’s self-attitude changing. They had more dignity, they earned respect and their changed vocal abilities allowed others to appreciate and recognize more of their innate abilities. They began to live more fulfilling lives.

One of the most challenging problems with stuttering treatment is that people who stutter tend to relapse. It is well known that after following therapy course, newly achieved fluent speech is highly likely to gradually return to its original state for no obvious reason. Sometimes this occurs rapidly. Our holistic treatment over several months addresses this problem.

The concept we suggest enables us to develop a new speaking skill that has nothing to do with stuttering. The new speech pattern excludes spasmodic pauses while the normal rate and the intonation structure are maintained. We called this kind of speech “zero stuttered”.

This kind of speech is based on the principle of saying the interjection “Oh”, which is like a sigh of relief when being released from extreme emotional or exercise stress. For example, a man is carrying heavy suitcases for a long time and finally put them on the floor… Imagine like what a relief that “Oh” sounds. A unique feature of this sound is that no one ever stutters when uttering it, despite being tensed up.

To imitate the relief interjection, one has to take a deep breath with maximum AAW bulging and then to relieve the accumulated tension dramatically.

Figure 1 shows the AAW (and the diaphragm as well) movement pattern while sounding the interjection. The curve rise and fall corresponds to the AAW (diaphragm) tension and relaxation respectively. Figure 1 indicates that, when suddenly relaxed, the diaphragm is “swinging” due to its elasticity resilience and thereby straining again which makes it returned to its starting position. Further, the diaphragm relaxes sharply again and finally reaches a state of quiet breathing, 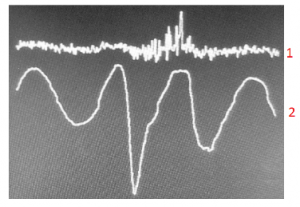 Note that when an individual utters “Oh” in a usual way, the AAW behaves differently (see Fig. 2).

Figure 2. 1 – uninformative signal; 2 – the AAW movement pattern for uttering the interjection “Oh” in a usual way

Probably it is the oscillatory pattern of the diaphragm movement that protects the interjection “Oh” from stuttering? That is exactly the idea that the zero stuttered speech theory is based upon.

We form zero stuttered speech in accordance with the following plan: 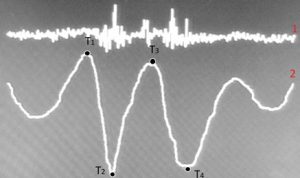 Learning how to develop the skill of zero stuttered speech is arranged in this way:The  first and accented syllables of the phrase have to be accompanied by sharp retracting the AAW. Those syllables that precede and follow the accented one should be synchronized with smooth forward movement of the AAW while controlling the process by breathing sensor and keeping relaxed. 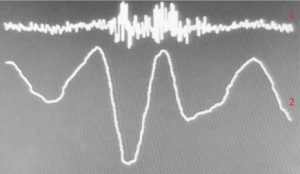 Figure 5. 1 – uninformative signal; 2 – the AAW movement pattern while saying the words “Excuse me” 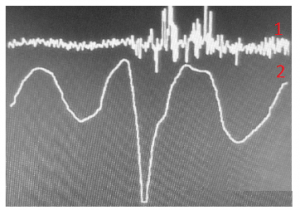 Figure 6. 1 – uninformative signal; 2 – the AAW movement pattern while saying the words “Excuse me please, where is the subway station?”

Figures 5, 6 and 7 representing several recordings of various phrases indicate that the diaphragm behavior pattern is virtually independent of the uttered phrase. This fact contributes to sustainable development of the zero stuttered speech skill. 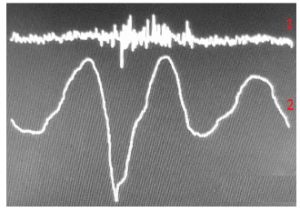 Figure 7. 1 – uninformative signal; 2 – the AAW movement pattern while saying the words “I live and work in Moscow”.

Certainly, all the aforementioned theses call for further research. However, we can claim that the idea of zero stuttered speech gives excellent practical results. Of course, learning such speech exhalation takes place over several months, but the results are worth it. The effectiveness of treatment reached 80%.

In conclusion, we would like to provide a few videos.