A message of pride in a community of people who stutter (PWS) can be a difficult concept to understand.  Society is changing, but there has been much history of exclusion, segregation, even the murder of people who do not conform with, or are different to, the majority.

We still have a long way to go.  It is hard to believe that only seventy years ago, during World War II, over ten million people were murdered because of their beliefs, ancestry, sexual orientation, or because they had a disability.  In some countries we think we’re making progress (although still with undercurrents of intolerance), and yet in other countries, intolerance is actively encouraged, even by governments.

Different minority groups are gaining ground, and rights, for themselves, by challenging discrimination and working with international groups such as the United Nations to formalise those rights.  The Universal Declaration of Human Rights has helped change to happen.

For example, a US citizen travelling from another country into Atlanta was detained as a direct result of her stuttering and they failed to believe her explanation about stuttering.  While she complied with the requests of the officials, she was, for good reason, disappointed with the outcome and launched a media blitz to educate others that this happened, and worked with the Stuttering Foundation of America to develop the ‘I Stutter Card’ that PWS can use to help identify themselves and explain stuttering.  But we don’t often hear about these types of positive outcomes coming out of such a negative incident.

So, back to the subject, what is Stuttering Pride?

Stuttering is still not clearly understood.  There is still much research to be done. But it is clear that much can be done to educate the public about stuttering and to prevent discrimination against, and misunderstandings with, PWS.

But it is us, people who stutter, who need to advocate for change, to be recognised, to get the respect of others and keep our dignity.  To be proud of who we are.

My interpretation is that we can be proud because we are people who stutter, not because we stutter.  If I stutter, I’m not going to spend the next ten minutes worrying what other people think of me because I stuttered.  I might acknowledge my stutter but I will move on, doing what I do, being who I am, and not mentally punishing myself because I didn’t speak fluently.

I challenge readers to share what makes you proud to be a person who stutters!

Like those pioneers in the LGBTI community, we need to stand proud as a community, to fight injustice and discrimination against PWS, and to stand up for each other.  Nobody else is going to do it for us.

I was lucky to have the opportunity to visit the Centre for Civil and Human Rights while at the World Congress in Atlanta.  While I found it emotionally challenging, it was a rewarding experience and one I will always cherish.  There was a lot that resonated with me, particularly statements from the Universal Declaration of Human Rights including;

Let me finish with a picture and a quote from the Centre for Civil and Human Rights in Atlanta while I was there for the World Congress, with my friends and colleagues in the online conference Hanan and Anita.

“Never doubt that a small group of thoughtful, committed citizens can change the world.” 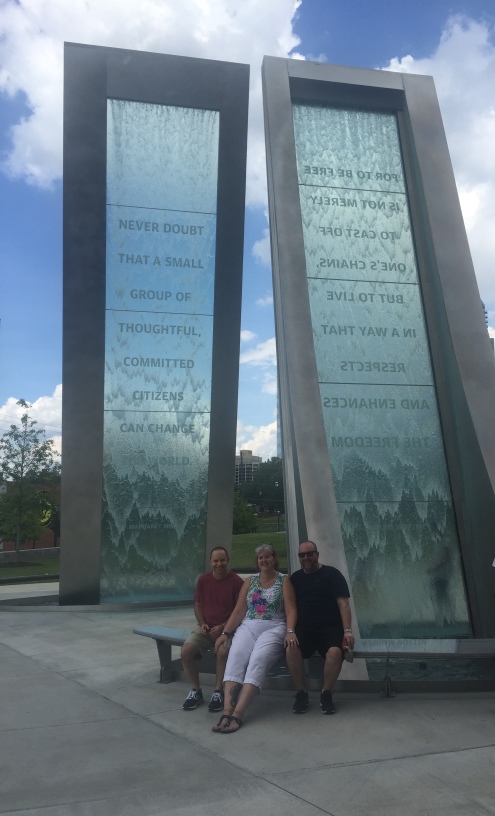 At the Center for Civil and Human Rights with Hanan (left), Anita (centre) and Bruce (right).