Note from author: Understanding of stuttering and its treatment is limited in Rwanda. The hope is that this work with the African Stuttering Centre, from which we get the referrals for the program described below, will improve this understanding and show people that help is available.

In 2009, my brother Andy was directing the Koinonia Corporation, which worked with local industries to provide solar power to Rwanda. One problem with this arrangement was that Rwandese1 businessmen often had difficulty understanding and being understood by Americans. If only, someone speculated, there was a profession that helped with that sort of predicament.

“You know,” said Andy. “I think my brother does something like that.”

I thanked him for having a general idea of what I do for a living and said I’d give it a shot. Because Rwanda has no speech-language pathology services (Hutchins, 2015; Munyankindi, E., personal correspondence), my idea was to establish a distance therapy program with Florida Atlantic University.

Because of Koinonia’s connections within the government of Rwanda, word of the proposed service spread quickly. When I visited the country, there was much interest in an English communication program. Officials from the Minister of Education to the National Director of Schools, introduced to me as, respectively, Theoneste Mutsindashyaka and Emma, were willing to meet about it. Representatives of the Rwanda Information Technology Agency (RITA) agreed to discuss the use of their space and computers.

The attentiveness to the idea was grounded in large part on its English language basis. Recent history has triggered a relatively urgent need for English instruction in Rwanda. In 1994, the country added English as an official language, along with French and Kinyarwanda, the latter being by far the language used by most of the population (McGreal, 2009). French was dropped as an official language in 2008 (Steflja, 2012) and, in time, much of the country’s education system was switched from French to English (Plonski, Teferra, & Brady, 2013). The result is an English-language country in which many young adults (that is, those requesting the aforementioned therapy), grew up speaking Kinyarwanda and being educated in French. In other words, English is their third language, but the one overtaking their country. From a practical standpoint then, speech-language clinicians from the United States had to interact with clients who were speaking their third most (and often least) proficient language.

But first there were issues of licensing and security to work out. The former turned out to be easy, as Rwanda had no laws restricting distance therapy. As for security, the potential clients were accustomed to Skype, but there were questions of HIPAA compliance because of Skype’s capacity to store data. That is, it is uncertain whether client confidentiality can be assured when data are potentially accessible, an issue still debated within the field (e.g., see Zur, 2016). In order to avoid even the possibility of non-compliance, in 2016 the FAU Communication Disorders Clinic changed its distance therapy program from Skype to ConnectUS which, unlike Skype, is purely a conduit service. That is, there is no processing or storage of the data between the two endpoints. 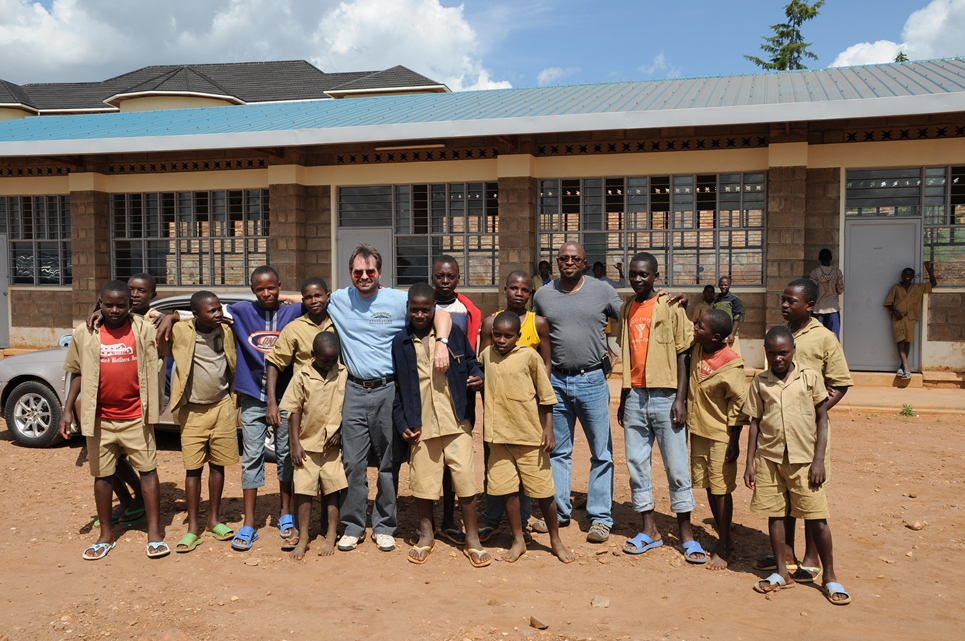 Visiting a local school in Rwanda

The distance therapy language program was in place for about a year when the clinic was contacted by Dieudonne Nsabimana of the African Stuttering Centre. Mr. Nsabimana read an internet story about FAU’s efforts (“Department of Communication Sciences…, 2010) and asked if the program could be extended to people who stutter. Given that I primarily supervise stuttering clients anyway, this request was welcomed. Mr. Nsabimana soon sent a list of people who stutter and were interested in being evaluated.

The FAU clinic staff emailed all potential clients, but only heard back from a few. Evaluations were conducted via webcam, with materials sent by email. They consisted of accumulating history information, surveying attitude and secondary behaviors, taking speech samples, and various reading tasks.

The subsequent treatment was fairly standard in its objectives, if not its delivery. Goals such as education about speech and stuttering, speech modification, desensitization, counseling, and generalization of skills to everyday life were addressed and, at this writing, clients are all making progress.

Still, there are unique challenges presented by distance stuttering therapy. For one, there are speech targets for which loudness must be monitored. However, perception of this particular voice parameter can change with variations in microphone placement and movements of the client. Clinicians had to determine when the client’s loudness was appropriate despite only hearing the client’s voice transduced through a webcam speaker.

In addition, secondary behaviors, those actions designed to hide or escape from stuttering, can create a potential problem via distance therapy. As these behaviors can literally involve muscle movements anywhere on one’s body, treatment in which the clinician sees only the client’s face and torso can result in missed movements. However, we could still teach the problems with the use of these behaviors—namely, that their effects are temporary and they can increase stuttering in the long-term (see Williams & Campbell, 2016 for a detailed explanation). Thus, observing every instance of secondary behavior is not necessarily crucial to treating behavioral aspects of stuttering.

The electronic image of the client could be a barrier in other ways too. The client’s eye contact is difficult to monitor without knowing where the web cam is placed in relation to the monitor. In addition, non-verbal cues can also be missed when so much of the other person is unseen (i.e., posture may not be as apparent or perhaps there is an impatient foot tap that goes unnoticed).

Generalizing skills beyond the treatment room was another challenging aspect of distance therapy. One of the ways in which clinicians attempt to extend therapeutic gains to different settings is by leaving the treatment room and forcing clients to employ new skills with a variety of listeners. With present distance therapy technology, such a practice would be awkward at best. Fortunately, generalization techniques such as home programs, increasing the number of listeners, and role-play are all possible via telehealth therapy.

In addition to the treatment drawbacks, there were also barriers strictly related to technology. Rwanda is landlocked and thus has limited access to submarine fiber optic cables (Nyirenda-Jere & Biru, 2015). Currently, the internal network is good, but the connection to the internet is slowed by its dependence on satellite or microwave transmission (Pottier, 2010). As a result, connections are too often interrupted and video images frozen. Also, the videocam microphones used by clients seem to pick up interference or background noise.

Based on interviews with past and present students and clients, there were additional challenges that arose with the administration of distance therapy: 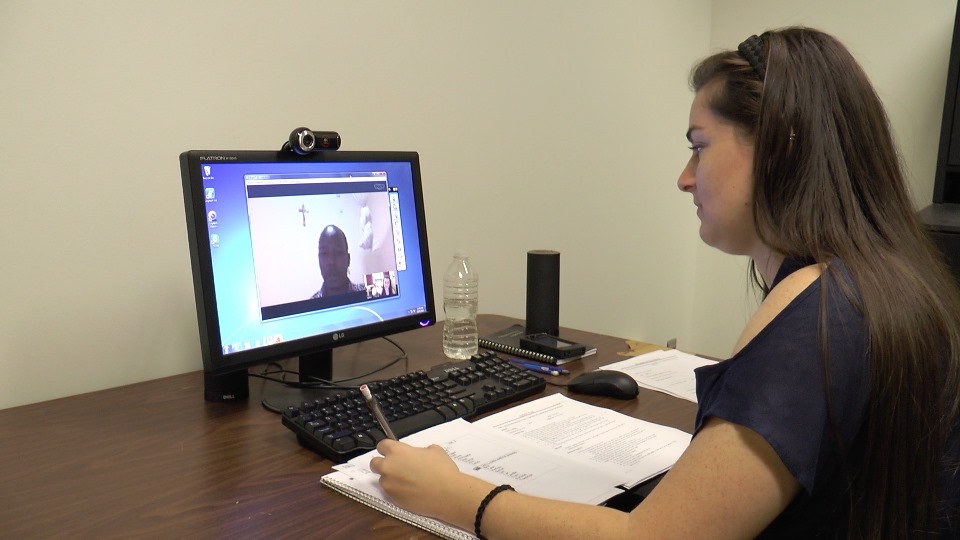 The aforementioned challenges have been more than balanced by the benefit of providing therapy to an area with no SLPs and limited understanding of stuttering. As one client noted, “I knew something was wrong, but no one would listen. The CDC took the time to evaluate my supposedly superficial disability and listen to my complaints.”

Other benefits were noted as well. Distance treatment means that anyone can be seen by a therapist, as long as he or she has access to a computer. And most of the students agreed that once the clinician and client both became accustomed to conversing via video communication, the experience was just as personal as face-to-face therapy.

Many of the clients make contact from their computers at work, so there is not the inconvenience of having to change locales. The sessions are often longer than face-to-face meetings in the FAU clinic, as the student clinicians treat in the mornings—when the clinic is not busy and there is little competition for rooms—and clients are seen at the end of their work days, when their schedules are often less restricted. As one client explained, “The treatment is perfect for me and helping me to improve my speech — it’s also easy to take part in since I don’t need to move. We are using video calls and sharing documents through email.”

A final benefit, albeit one unrelated to stuttering, is that students get a feel for language as a shared experience. That is, people communicate not only via learned vocabularies, but also utilizing a familiarity that comes from pooled understandings (Liebal et al., 2009). By way of example, here is an exchange that would be understood by any American:

“Peppering down out there?”

“Oh man. Does the phrase ‘Cats and dogs’ mean anything to you?”

A listener who knows every English word but no common idioms would not understand that the topic of conversation is rain, namely because the word is never used.

In another context, I recently heard a man exclaim that an athlete ran a forty yard dash in 4.4 seconds. His listener’s response was, “Man, that’s picking it up and laying it down!” This is a particularly useful example because the response is not a common idiom and does not really even make sense (unless “it” is referring to the runner’s feet, perhaps). Nevertheless, everyone around understood that he was expressing agreement. Shared experience history allows for common understanding.

Of course, comprehension based on mutual language history is not present with clients who acquired English in completely different settings and contexts. Thus, the clinicians have to learn how to adjust communication and make their language more literal, a process which helps them become more focused therapists who are forced to think about language.

Informal evidence suggests that distance therapy will continue to grow. The African Stuttering Centre has already enlisted another university CSD program for distance therapy. Moreover, FAU’s department has been contacted by three different universities for more information about the teletherapy program described here.

Finally, word of the FAU program has stretched beyond Rwanda. Inquiries have come in from Great Britain, Egypt, Brazil, and the Caribbean. Additional telehealth clients are scheduled for evaluations, at least some of which will undoubtedly begin treatment shortly.

1According to the first client I evaluated, “only Americans say ‘Rwandan’” and everyone else—including those in Rwanda—use “Rwandese.” Thus the use of the latter term here.

McGreal, C. (2009). Why Rwanda said adieu to French. The Guardian. Retrieved from https://www.theguardian.com/education/2009/jan/16/rwanda-english-genocide.

Williams, D. F., & Campbell, J. (2016). Shining a Light on Stuttering: How One Man Used Comedy to Turn his Impairment into Applause. Geelong, Victoria, Australia: The Brainary.