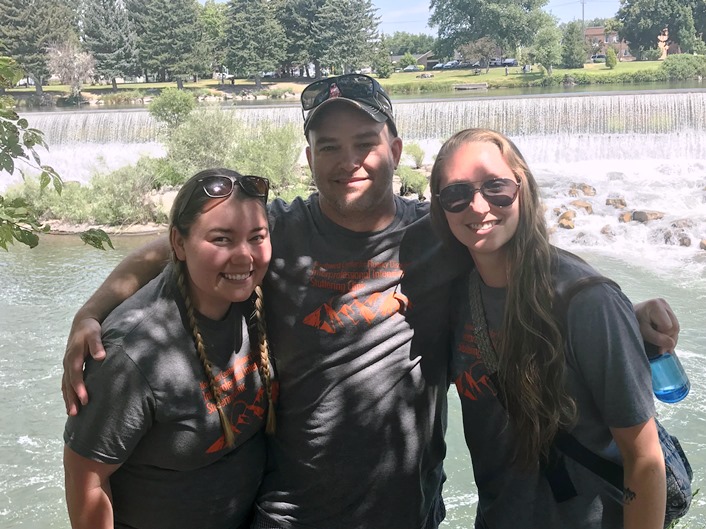 This past summer I participated as a clinician in the Northwest Center for Fluency Disorders Interprofessional Intensive Stuttering Clinic (NWCFD-IISC) at Idaho State University. From my perspective, the theme of “speak your mind” encompasses my entire experience with the NWCFD-IISC, and in keeping with this theme, I will honestly and openly “speak my mind” about my experience.

I was one of two clinical psychology students participating in the NWCFD-IISC, and we were the first two students from our department to participate in the clinic as clinicians. It had been recommended that I apply, but I honestly did not understand why or what I would even do within the clinic. Somehow, I was selected to be one of the two students to participate. I remember sitting in training asking myself what I was even doing there, because I knew next to nothing about stuttering, or how to work with an SLP, and absolutely nothing about how to help a person who stutters. Most of my clinical experience comes from working with those with suicidality, psychosis, and generally those in immediate crisis. This appeared to be everything but what I was used to. On top of my anxiety and fear, the clinic required vulnerability and openness to an extent that I was extremely uncomfortable with. The combination of my experiences, emotions, and my own insecurities made me feel like a cat being thrown into water.

The NWCFD-IISC had the clinicians pseudo-stutter, and everything was going great while we were in the community practicing. Right before we met with our supervisors to discuss our experiences, I said, “Let me try one more.” Then I walked into the massage clinic. I walked in and asked how much a massage was with my pseudo-stutter, and the lady began laughing. She looked me in the eyes and laughed. She walked past me and asked my partner, Kristin, “Do you talk?” My heart sank. I decided to try one more time and again asked how much a massage was. She once again laughed and pointed to a sign with the prices and walked away from me. I was able to get out a “thank you”, and we left. I stood outside the massage clinic trying not to cry, because I was with my partner and another team. I felt a combination of emotions, but I was downright angry. I was not angry at her, strangely, but at myself. I had told myself that I would stand up and “speak my mind,” yet I said thank you. Seriously, thank you? My mind was racing. I am the person to speak my mind in those situations, but I didn’t. What just happened to me? Who was I? I felt lost within myself.

Jason, our client, and all the other clients arrived a few days later. I remember sitting in our meeting room with all of the supervisors, clinicians, and clients when Dr. Hudock, one of the program coordinators, asked us to discuss our experiences pseudo-stuttering and made eye contact with me. I froze. I was struggling with my identity, and I have always struggled with vulnerability, and here I was with this experience that needed to be shared. I managed to raise my hand, and I immediately felt my anxiety, fear, sadness, and anger all creep in. Once it started coming, I couldn’t stop it. I didn’t end up just telling my experience; I shared my feelings and even began to cry (which is very unusual for me).

I immediately regretted sharing. I felt as if I had done something wrong and as if I wasn’t good enough, a personal feeling that I have always known but truly realized how much it affected me during the clinic. I did not feel good enough for Jason, either. Being in that place of vulnerability was excruciating, but I was surprised to learn that I was not alone. The unique connection of my team helped Jason and Kristin to recognize what I was experiencing during the process of sharing my story, and they made it clear that they weren’t going to let me stay in that dark place without their company. They supported me and talked through my insecurities. Jason validated me and appeared so thankful that I had shared. I thought this clinic was to help Jason speak his mind, but it was also so much more. For me, this clinic allowed me to watch Jason find his own voice and authenticity, but it also allowed me to find my own voice as well.

I often dealt with feelings of inadequacy (both perceived and real) while working at the NWCFD-IISC this summer. I was fortunate to have many positive experiences in the community while pseudo stuttering. People were mostly kind, supportive, and generally encouraging. People did finish my sentences, and some looked visibly uncomfortable when I spoke to them, especially when I had pseudo blocks that lasted more than a couple seconds. I didn’t enjoy these situations, but I more or less maintained “perspective”. This was about education and empathy, and these experiences certainly provided me that.

However, perspective all but fled the scene when I stepped into a candy shop. We had had some really good conversations in the community that day, and I was finally getting the hang of the mental acrobatics that stuttering techniques require. I was hoping to finish off our trip to Jackson with a caramel apple. I approached the cashier and asked her for a caramel apple that was pre-sliced. I was shocked when she did a spot-on imitation of my pseudo stuttering (techniques included!) and started laughing at me while others joined in. I blushed. My first instinct was to run. I was at the front of line, and it would have been easy for me to sprint out the door, no questions asked. I could feel my face heating up and employees and other customers staring at me as I asked her the same question, still stuttering, just in a much quieter voice.

I got my caramel apple, but as I walked out of the shop, I felt ashamed. Here was an excellent opportunity to provide education and self-advocate, but I failed. As I saw my team members, I thought about keeping it to myself. I didn’t want them to know about how I’d messed up, and since no one from the clinic saw it happen, it would be easy to pretend that it didn’t. But as I looked into the faces of Shelby and Jason and thought about everything they were putting on the line for our team, the words tumbled out of my mouth. They offered a lot of helpful suggestions, as did other people from the clinic, but I said no to everything. I didn’t think that anything would change, and I didn’t think that anyone should do something for me that I should have done myself.

I wasn’t able in that moment to self-advocate, but Shelby was. She returned later to that same candy shop and politely but firmly asked that cashier if she knew what stuttering was and gave her an explanation. We can all take a collective sigh of relief in knowing that there is one less person in the world who will make fun of someone for stuttering. Regardless, I still really struggled. I should have educated her, I shouldn’t have told anyone what happened, I shouldn’t have let that affect me, and a million other variations of that same theme broadcasted through my head. I was worried that I was a coward, that I was weak. I wished that I were someone else who was better.

One of the most enlightening things Jason shared was how he realized that while he didn’t choose to stutter, he still had the power to choose to work on his speech and accept that there would be hard work involved. Speaking your mind is empowering, but it’s hard. It’s hard, and if you stutter, it’s hard every day. But ultimately, there really is no “wrong” way to speak, and the perceptions of other people (and sometimes, our own painful perceptions of ourselves) don’t change that.

I’ve participated in similar intensive clinics before, but I have never participated in a stuttering clinic with the counseling piece. I really connected with the counseling piece. During a group counseling session, we learned about values and learned about which values were most important to us. We copied down our ten most important values, and some of those values for me included trust, authenticity, honesty, compassion, and love. We talked about things that had happened that day, and Shelby helped me to identify when I was connecting with each of these values. My team helped me realize that when I use circumlocution to disguise my stutter, I am not saying what I want to say. Saying what I want to say is important to me, but sometimes I feel like someone not knowing that I stutter is a victory. It’s easier to feel safe and in control than to stutter.

But I came to the clinic ready to do work, and Shelby and Kristin were right there with me. I think all of us encountered some challenges along the way. The NWFCD-IISC put me in real life situations that made it pretty much impossible for me not to stutter. We did have sessions where we were in a room together talking about managing my stutter or processing my experiences, but I especially enjoyed getting out and around and having some organic conversations. I think that’s all part of the process—creating some new experiences with stuttering while also reflecting on some of the prior ones. It’s important to me to get to a point where it’s just natural. I’m not thinking about it so much—I’m just talking to people. I think that’s what fluent people feel like. I don’t know. I know fluent people think about what they’re saying, but they don’t have to think as much about how they say it.

One of my favorite moments at stuttering camp this year was the challenge course. The challenge course includes two parts: a climbing course up a fifty-foot Alpine Tower and a big swing “by choice”. It wasn’t hard to see the obvious metaphor. For the Alpine tower, we were put in groups of four. One person climbed while the other three stayed on the ground to help the climber up and offer moral support. I was pretty sore at the end of the day, but I made it to the top! The big swing involved about ten people working together to pull someone up in the air on a swing to the top of the tower. Whoever was on the swing was able to let themselves go after saying something either out loud or in their head that they wanted to let go of. I yelled, “perfection!” and took a (literal) leap of faith.

Towards the end of our time together, everybody was feeling really comfortable with each other. Everybody was having fun with everybody. It was kind of a bit of a family dynamic. That was another one of my favorites. I’ve participated in intensive stuttering clinics before, and I have a lot of experience managing my stutter. Sometimes I just wanted to open up my head and give my knowledge to the other people who weren’t as far along in their journeys. But I know that everybody got out of it exactly what they needed.