During the summer I was on a stuttering camp in Levice (Northern-Italy) with people who stutter from all over Europe. Here we could speak our minds freely about stuttering and other (related) stuff, without caring about our stuttering, because stuttering was the norm. Directly after the camp I wrote this blog, where I spoke directly from my mind about this amazing experience.

People who know me, know that I like writing, because that gives me the freedom to say what I want to say and speak my mind 100% freely. I usually write about scientific/historical facts, but this time I step out of my comfort zone and will try to express my thoughts and feelings.

Last summer I was at a camp for 7 days in Levice in the mountains in Northern-Italy. This camp consisted of people who stutter (a.k.a. PWS) from all over Europe. Before I left, my friends and family back home wondered what the hell I was going to do on a ‘stuttercamp’? I had reactions “Dude, you barely stutter, why do you go?” or “Nice that you can use your little stuttering to go on a holiday with sponsorship.”. Let me be honest: I didn’t know the day before I left where I was going to. I even thought that I was going to Ceva almost until the day I left…

Now I have the answer to the question why I went. I went to a ‘stuttercamp’ to come together with pws, but not to solve our problem with stuttering, but to create an imaginary world where stuttering is the norm. Sounds strange, right? For me this was very special, because since the moment I realized as a kid that I had a stutter, I was always aware of the possibility to start blocking instead of just saying the words the way I wanted, which obviously influenced my life. I admit that I am much more confident about my speech and have much more fluent periods than when I was younger, but the thoughts are always there and will probably never totally fade away.

You might wonder: aren’t PWS all just shy/quiet people? No, they are not. From day one I personally had a direct feeling of chemistry with many participants. Not only because we all share our problem with fluent speech (in our own ways), but also because PWS seem all to be very open-minded, sensitive – which is in my eyes an advantage – and interested in human internal growth. Maybe the group was biased, because not every PWS goes on a camp with so many strangers, but still, it was amazing to observe and experience how everybody developed and became very comfortable with each other in only 7 days. We shared our values in life, feelings, thoughts, cultures, strange habits, inspiring life-events during the breaks and workshops which were given by other PWS, and most importantly: spoke our minds freely. Only the cooks were non-PWS, but admitted that they started to stutter after the week (maybe they said this because they wanted to be ‘officially’ part of our awesome PWS-community).

Besides the serious stuff, we had lots of fun, stepped out of our comfort zones by performing on stage, played games, threw some parties, danced, ordered cock-cock-cock-tails, watched many world-cup matches (thanks guys for all the Belgium-support), and sometimes forgot to sleep.

The next question is: how is this going to help me in the fluent-world? I don’t know yet. Let’s hope that I can start to go further with don’t give a sh*t anymore and help the stutter community and PWS that were not on the camp to expand their comfort zones as well.

Oh yeah, I have also now over 40 new friends from all over Europe. I don’t know how many times I already said thank you (where stuttering on the words doesn’t count), but again: thanks all for being great!

For all the fluent people who came to this point of reading my text, I have an advice: if you want to become a better listener -> find some more stuttering friends. 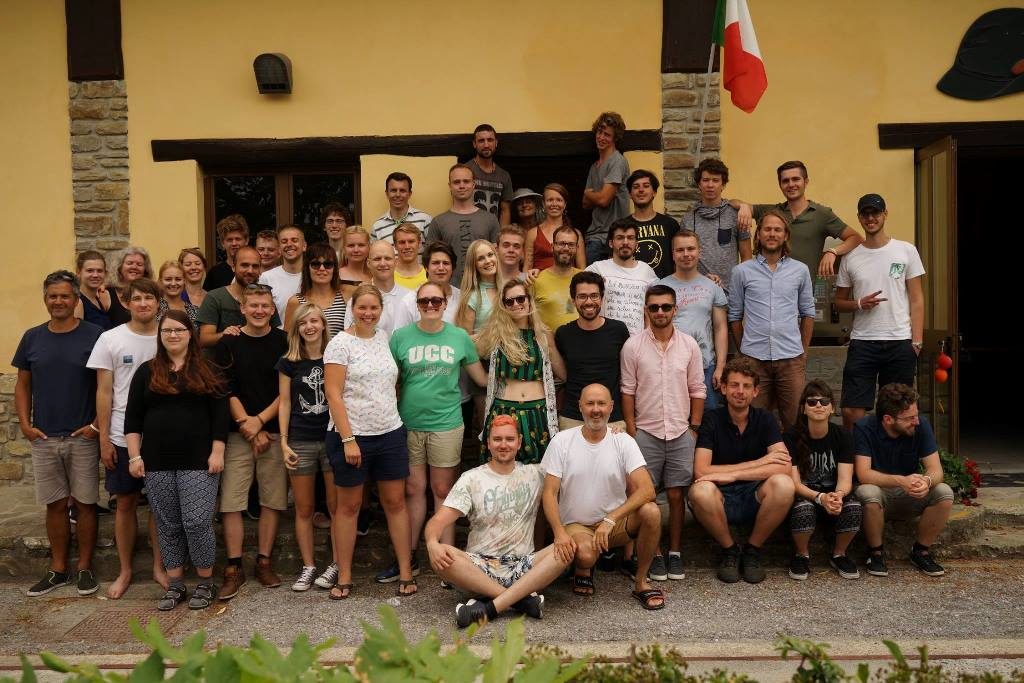 Group photo of the amazing group or I prefer to call it a team!