Our paper, describes the results of a multi-country survey of what adults who stutter have experienced and want to experience in the way of support by family, friends, colleagues, and others who do not stutter. The results are illustrated on a poster, could be translated from English into other languages, and offers convenient and broad dissemination. It encapsulates the common principles of interacting with people who stutter in the best way.  This closely aligns with the theme of the conference, “Growth Through Speaking,” in that it educates the non-stuttering majority regarding how they might best interact with a stuttering individual. To this extent, the person who stutters will feel more comfortable with his or her stuttering.

Human beings are not able to survive in isolation; people are social creatures. The abilities to communicate, interact and participate are essential skills for humans. As we mature, we perform various social roles and discover our potential. We develop through communication. It stands to reason that communication as a fundamental human right and should be respected. Furthermore, all people, and no less people with disabilities, should have the right to freely communicate. The Universal Declaration of Communication Rights which was signed by almost 12,000 people proclaims: people with communication disabilities should have access to the support they need to realise their full potential (International Communication Project, 2014; Mulcair, Pietranton & Williams, 2018). This year’s theme of the International Stuttering Awareness Day (ISAD) online conference: Growth Through Speaking is an excellent extension of this idea. Indeed, Marcus Tullius Cicero, Roman statesman, orator and philosopher once said:  We are born poets, we become orators. Similarly, Ralph Waldo Emerson asserted that all great speakers were bad speakers at first. Becoming a good speaker is a process and this is done primarily by practicing interpersonal communication in everyday life situations and by participating in interactions with others. As the readers of papers in this conference clearly recognize, some people who stutter seem incapable of interacting easily with others. Due to listeners’ uninformed or negative reactions, people who stutter cannot fully enjoy every day interpersonal communication activities, which can be overly challenging or even painful.

Research results reported from the International Project on Attitude Toward Human Attributes (IPATHA) show that negative social stereotypes are still very common among the public with regards to stuttering and to individuals who stutter (St. Louis, 2015). Public stereotypic beliefs have social consequences leading to internalization for the people who are stereotyped. Scientists have referred to this process in people who stutter as “self-stigma,” or negative beliefs, presumably derived from one’s family and society (Boyle & Blood, 2015).  Behavioral components of attitude are also important. An overt pattern of behavior, or even the intention to act, can result in negative actions against a person or a group. These often take such forms as avoiding the person or group, aggression, or discrimination. What is interesting, people who stutter can be stigmatized not only by non-educated community members, but also by professionals. Ways that professionals stigmatize individuals who stutter include paternalism (“I know what is best for you.”), dependency (“You can’t live without me.”), marginalization (“I know parent training is important, but to be honest, it is just easier to work with kids myself.”), scapegoating (“It is your fault.”), or other forms of professional stigmatization (Downs, 2011).

Nevertheless, it has been the specialists, mainly speech-language pathologists, who have sought to educate the general public about how best to interact with people who stutter. Most professionals have long been convinced that most negative stereotyping, stigma and discrimination result from ignorance. Caring speech-language pathologists, especially those who were themselves people who stutter, have sought optimal approaches to educate family members, classmates, teachers, and general public about how to interact with people who stutter. As a result, numerous lists of DOs and DON’Ts for supporting children and adults who stutter have evolved. The rationale to create these lists was to help the non-stuttering majority be or become more educated, supportive, and helpful. The various lists and guidelines have been copied, translated, and widely disseminated; yet, their validity has not been supported with evidence.

To address this limitation, we sought to subject the advice typically given regarding interacting with people who stutter to evidence-based practice. One of the principles of evidence-based practice is to take into account clients’ needs, perspectives, beliefs, opinions, values, and goals in treatment (ASHA 2004; Kully & Langevin, 2005). St. Louis and colleagues surveyed people who stutter from the United States and Canada using a new instrument, the Personal Appraisal of Support for Stuttering–Adults inventory (PASS–Ad) with the purpose of developing evidence-based guidelines for the general public (St. Louis et al., 2017). The survey asked adults who stuttered to rate numerous of behaviors and beliefs according to how supportive they thought those would be for them. Additionally, the respondents were asked to rate those people in their lives who had, for them, been the most supportive. One year later, a replication study was conducted in Europe and the Middle East in order to extend the North American findings to samples of adults who stutter from four countries: Lebanon, Poland, Slovakia and the Czech Republic (St. Louis et al., 2019).

Overall, a significant majority of the respondents from both studies agreed with typical DOs and DON’Ts for interacting with people who stutter. The following conclusion, which was created as a summary of DOs and DON’Ts by St. Louis et al. (2017) characterized both studies:

When first interacting with a person who stutters in Western* societies, be engaging, patient, accepting, friendly, and as comfortable as possible, all the while being a good listener. After getting to know the person, learn more about stuttering and be flexible about modifying your interactions according the person’s personal preferences for being supported, realizing that sometimes a particular action, such as trying to guess and fill in a word being stuttered, though generally not advised, is sometimes desired. After considerable interaction, you may gently inquire if you should ask questions about the stuttering, offer advice or referrals, or otherwise comment on the stuttering, but be ready to respect the stuttering person’s wishes. (St. Louis et al., 2017, p. 10; 2019, p. 183).

*The term “Western” was substituted for “North American” after the replication (St. Louis et al., 2019).

As indicated, the primary purpose of these investigations was to develop evidence-based guidelines for interacting supportively with people who stutter by their communication partners. It was meant to revisit the traditional DOs and DON’Ts for interacting that have been widely publicized over the years from the perspective of people who stutter themselves. While collecting data for the second study, the European and Middle Eastern research team came up with the idea of creating an awareness poster that would summarize the main findings of the research in a graphical form. 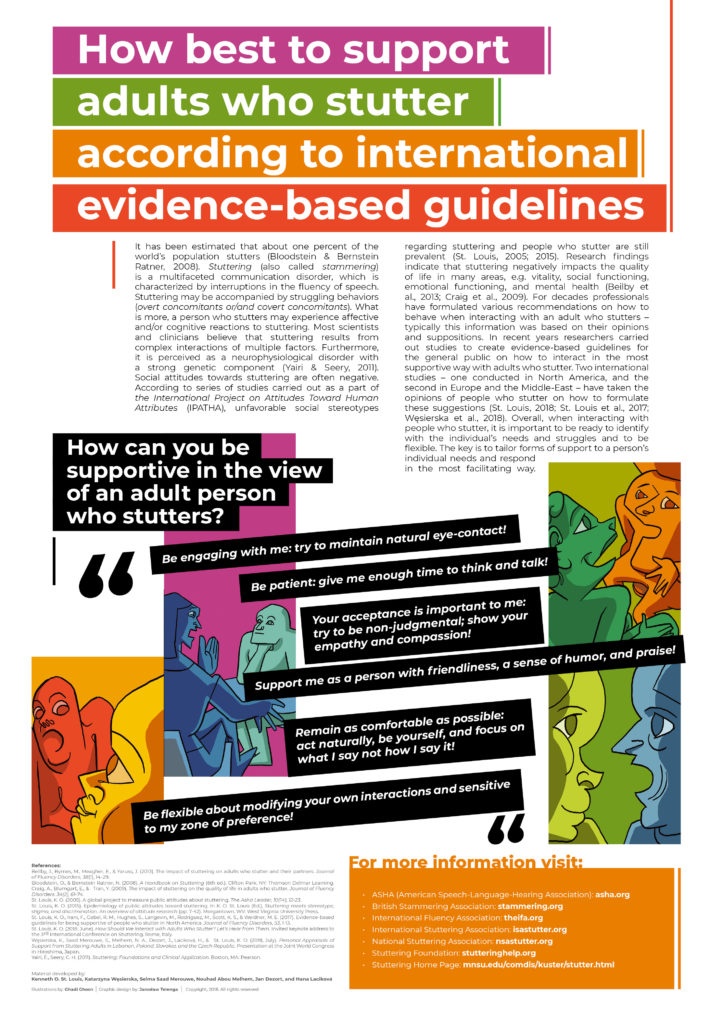 The illustrations added to the poster were created by the Lebanese artist Ghadi Ghosn. These illustrations of people who stutter captured in interactions with the other man could be perceived as quite harsh. Conversely, the poster team of creators agreed that the artist probably chose this way of expression to dramatize how stuttering can put a man in a difficult position during the process of communicating. The graphic design was prepared by the Polish graphic designer Jarosław Telenga. To date, the poster has been translated into Arabic, Czech, French, Polish, and Slovak. All language versions of the poster are available in open access on the website of the International Conference on Logopedics: Fluency Disorders: Theory and Practice: www.konferencja-zpm.edu.pl 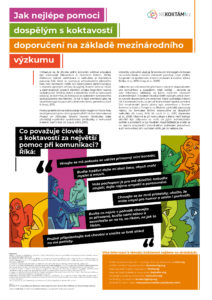 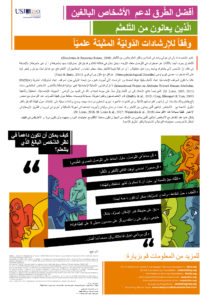 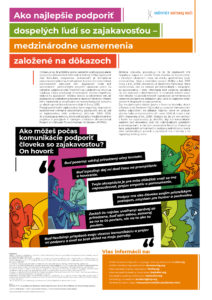 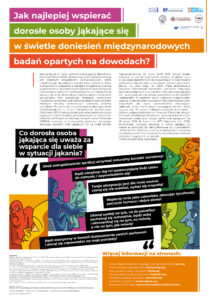 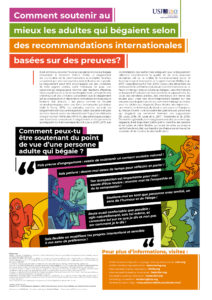 The social model of disability has become increasingly widespread in recent years (Simpson, Everard, 2015). It promotes changing the perceptions and approaches of people struggling with different forms of disability. Whereas the medical model of disability projects that a disabled person must be cured rather than care for, the social model focuses on necessary social adjustments. According to the social model, among the key actions should be changing social attitudes towards disability and the disabled individual, especially providing appropriate social support. The social model requires society to disseminate knowledge about disability, increase understanding, nurture an accepting environment, and make appropriate accommodations for disabled individuals. The focus for applying the social model in the case of people who stutter should begin with removing barriers so that they can fully realize their potential, and indeed, to allow them to live their lives well, rather than to merely fix or repair them, as the medical model practices. Therefore, the perception of what leads to success in stuttering therapy and what its goals should be are reformulated. It was widely believed in the past that obtaining fluency was the most important manifestation of success in stuttering treatment. However, this point of view has been changing recently. More professionals have advocated that people who stutter should obtain the best possible communication skills and competencies for success in the different roles they’re expected to play in their daily lives. An interesting interview on this subject was granted by eight interviewees in an article entitled:  Success in stuttering therapy – what is it and how to achieve it – opinions of ‘double’ experts (Blanchet et al., in press). These individuals were recognized as ‘double experts’ because of their everyday personal experiences with stuttering, while at the same time being professionally or socially engaged in outreach activities to support people who stutter. In the opinions of these double experts, the most vital sign of success in stuttering therapy is a person’s improved quality of life. This means, of course, that improving fluency can be one of the goals of therapy; however, also very important is to strengthen the process of change by building self-acceptance and by acknowledging a client’s readiness to face challenges. It is essential that individuals with stuttering be able to fulfill their goals, fully perform in daily life and actively participate in various forms of social activities. Only unrestricted communication can give such opportunities. What is more, for s person who stutters to be able to grow through speaking, some social changes must be addressed.  No doubt, it is necessary to modify the unfavorable conditions currently present in society as much as we can. Some actions must be taken by both the stuttering community and specialists. A poster that disseminates evidence-based findings on improving appropriate interactions with people who stutter can be a helpful tool. It can be used to achieve significant changes in cultural competence during interactions with individuals who stutter in different social settings. The poster creators believe that summarizing the results of these multinational studies into one poster is a good example of utilizing evidence-based practice in stuttering advocacy and intervention. It can be used not only by professionals but also by people who stutter or self-help leaders so that they can spread the knowledge about how those who stutter would like to be treated when participating in daily life situations. In a few words and graphics, it can educate the public about the appropriate reactions and interactions with someone who stutters and about the fact that it is never too late to be supportive. We believe that this poster is one more way that people who stutter can apply this year’s ISAD theme, Growth Through Speaking.

The poster is copyrighted; however, the authors would be delighted to make it available in other languages. We welcome anyone wishing to translate the poster to another language to please arrange it with Katarzyna Wesierska beforehand. Please email her at: katarzyna.wesierska@us.edu.pl.

The authors would like to thank their colleagues – all members of both research teams and all people involved in the poster creation.