L: You talk so smooth… you have an answer for everything.
B: Whatcha want me to do. Learn how to do stutter?
-Dialogue from Casablanca (1942)

It is to be noted that this essay will discuss plot points from various movies. The movies discussed are found in the reference-list at the bottom.

What we see on the screen is not reality. Cinema is a representation of reality, carefully constructed by a team of filmmakers, making it ‘larger than life’. Many instances exist where the world from the screen hopped over to the real world. Venice, in the minds of the public, has been nothing but shiny canals and gondoliers since Top Hat (1935). Ever since Jaws (1975), sharks terrify people. You never saw a Dinosaur, but if you want to imagine a living one, you will probably use Jurassic Park (1993) as a reference.

Many aspects of them cinema have since become part of the collective unconscious. Movies defined how we looked at romance and relationships. They helped us to visualise how war looks like. Most importantly they confronted us with people that may have traits we have never seen before. To tell a story, filmmakers must make sure that the story they tell is legible to the audience. They use cinematography to convey tone and emotion. However, making contents legible transgresses form and easily moves into the realm of content. Hence, popular entertainment often adds to the creation and spread of stereotypes. Film both takes from public perception and adds to it, creating a self-reinforcing loop. Essentially, film is a barometer of thoughts of the public. Most of the screenwriters and directors that use stuttering characters are not People Who Stutter (PWS) themselves. Not all of them take the time to explore such a complex condition. Yet, their way of presenting can make an illusion seem real in the minds of audiences. Portrayed consistently, as shy and offbeat, audiences might expect PWS to act similarly in real life. As Zaller (1992) demonstrates, individuals rarely have a pre-decided opinion on a subject. Rather, they sample individual considerations from the information they consume to form an opinion-on-the-spot. If a person has never met a PWS before, he is very likely to subconsciously fall back on the information that he knows. For example a certain scene in a movie where the PWS was handled in a certain way. As we will see, many films use stuttering to signal a flaw in character that is central to the plot.

This essay will discuss a sample of films to show underlying trends of cinematic representation of stuttering. By speaking up and attacking misconceptions, the public perception, as disseminated in films, could improve.  A realistic view of PWS in cinema would allow PWS to see themselves more realistically. While it is of course never a bad idea to laugh with ourselves, a general call to awareness to avoid non-realistic portrayals and the spread of misinformation through cinema would help in informing the public about stuttering. Based on Cristobal’s (2009) notion of transfluency, where stuttering is considered an outing of human diversity rather than a deficit, it is important to chance public perception when it is inaccurate.

The sound of silence

Stuttering is more than the repetition or interruption of speech. It also involves facial expression and hidden feelings or thoughts. How fitting it is that the first stuttering character in cinema is Harold in Girl Shy (1924), a silent film. In this story, a shy writer tries to form relationships with women, while writing a book about forming relationships with women. Throughout the film, he is confronted with a variety of speech-related problematic situations. He fails to persuade his publisher, he misses a train when he tries to buy a ticket, and he does not want to dance afraid of someone mocking his speech. 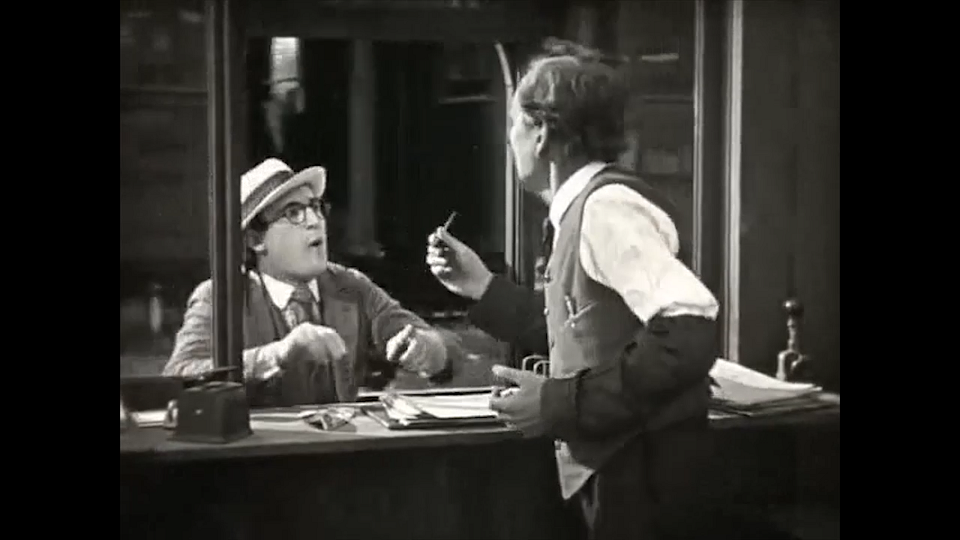 Harold tries to order a ticket while the train is passing by.

A redeeming trait is the suggestion that Harold is more than his stutter. As we will see, many films use stuttering to signal a flaw in character. There is an interesting parallel between Harold’s current predicaments, the failure to connect to people, and the book that he is writing, about connection and interaction. It is suggested that Harold knows perfectly well how to interact in theory. However, his stutter messes up the moment. Albeit that the stutter is sometimes used as a gimmick (for example, Harold’s stutters are accompanied by a shaky violin), the overall portrayal is realistic.

After Harold’s character develops a relation with a girl, his fluency increases. If the relation starts going south, the fluency decreases. While this is realistic, the association between ‘love’ and ‘stuttering’ can be problematic. This advances the idea that PWS speak the way they do as associated with sexual frustration or general dissatisfaction. The increase in fluency is possible due to increased comfort but, in the minds of the audience, this can lead to some problematic associations. While Girl Shy is a noteworthy and nuanced film for its time, the overall thoughts that the film creates about stuttering do need some context. 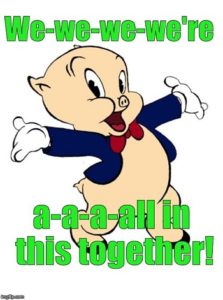 Nina G (2019) joked that, a few decades ago, the closest thing to a role model for PWS was Porky Pig. Take, for example, The Case of the Stuttering Pig (1937). Porky Pig’s primary stuttering traits are severely exaggerated. Warner Bros stated that, in their cartoons, they wanted to give each of their characters a recognizable trait. Porky Pig’s happened to be stuttering. The studio hired Joe Dougherty, who stuttered, to voice Porky. However, Joe could not control his stutter, which lead to lengthened recording sessions. Warner Bros eventually fired Joe and replaced him. Mel used the stuttering to maximal comedic potential. In interviews, Mel stated that he did not really intend Porky’s voice as a stutter, but rather than the repetitive grunting of pigs. Due to upheaval considering Porky, Warner Bros donated 12.000 dollars to the National Stuttering Project (NSP) in San Francisco and made a series of public service announcements denouncing bullies.

With the coming of sound, the most well-known aspect of stuttering could now be used: interrupted speech. In the ‘70s, we start to notice different recurring ways of showing stuttering.

Since fluency is more common than non-fluency, human communication has traditionally been dominated by the view of ableism (St. Pierre, 2012). Fluent speech is a ‘normal ability’. All deviance needs to be ‘corrected’ to conform to the norm.

In The Cowboys (1972) a young stuttering boy called Bob sees someone drowning. Panicking, he tries to call for Andersen, but has a severe block that almost leads to the death of the victim. Bob is then verbally abused and blamed for the possible death. He should quit stuttering or go away. Bob starts swearing at Andersen and loses his stutter in the progress. Bob ceases to not stutter. This idea, that a stutter is something to ‘snap out of’, is hurtful and unrealistic. It sees the stutter as a serious flaw to be rectified.

This idea of ‘stuttering to be rectified’ is commonplace. In One Flew Over the Cuckoo’s Nest (1975), Billy is an inmate in a mental asylum. While the stutter is not the primary reason for his incarceration, his ‘problematic’ traits, like heavy nervousness and anxiety, are continuously associated with it. After having intercourse, his stutter vanishes, only to come back after nurse Ratchet scolds him and reminds him of his ‘mother’. Stuttering becomes associated with trauma. Once the trauma leaves, the stuttering leaves. Billy, unable to cope, finally commits suicide. In The Mirror (1975), Yuri Zhari is ‘cured’ from his stutter after hypnosis. A therapist asks Yuri to move all his tension to his hands. By removing the tension, the stutter also vanishes. 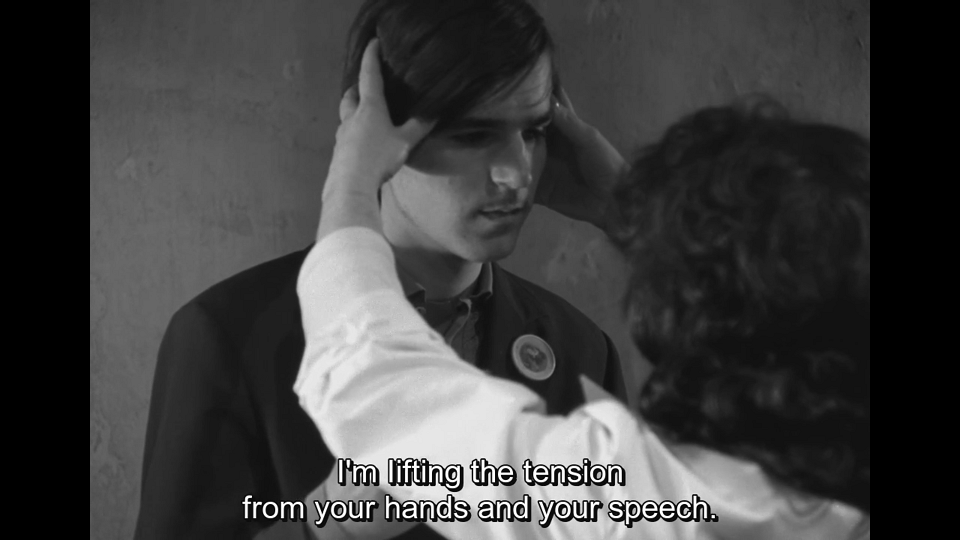 Stating that stuttering needs to be rectified advances the idea that there is something inherently wrong with this manner of speech. Examples of this are widespread and notably related to ‘perceived innocence.’ For example in Harry Potter and The Philosopher’s Stone (2001). At the big finale, Professor Quirrell reveals that he only stuttered because no one would suspect ‘poor, stuttering professor Quirrell.’ Next to the sly Snape, the audience is tricked into believing that Snape is the villain, while using stuttering as a ploy to mislead the audience. 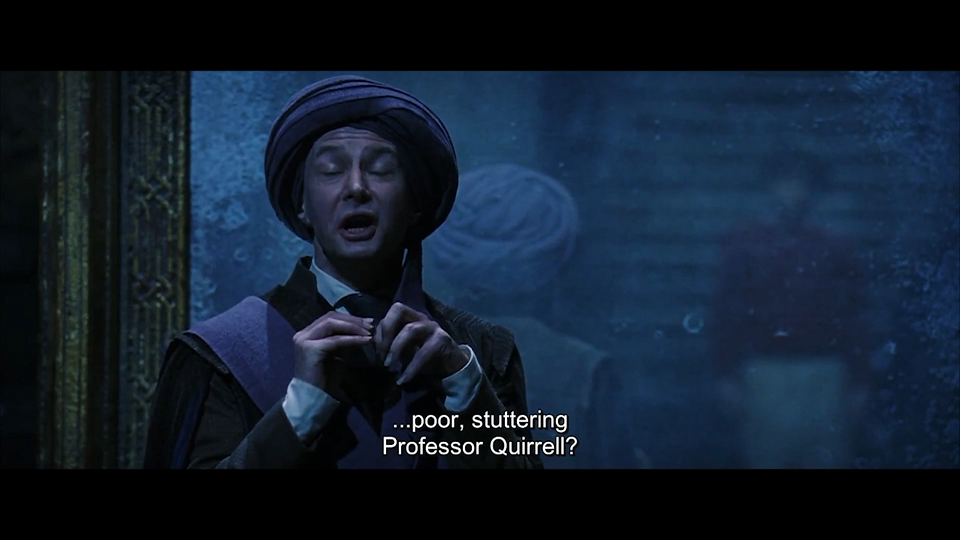 Who would suspect him?

In My Cousin Vinny (1992), stuttering is linked to ‘incompetence’. During several court case-scenes, a stuttering lawyer severely blocks, spits on members of the jury, and generally makes a fool of himself. At this point in the film, the stutter does not serve a purpose, apart from laughing at the lawyer’s incompetence and the surfacing doubts of the accused, who realises he will never get off with a stuttering lawyer. It is interesting that, when the lawyer starts his plea, he stutters less. He appears confident, only to lose it when unable to answer difficult questions, after which the stuttering resurfaces.

Comedy and drama are inevitably interlinked. Every great comedy has the slightest hint of sadness. Stuttering is then used in different registers: sometimes for a laugh, sometimes for a cry, most often a combination. While there is no shortage of stuttering characters used as comic relief, this is not as commonplace as one would think. In Life of Brian (1979), the stutter creates frustration with other characters, only to reveal that the stutterer did not stutter at all.

The most interesting example is A Fish Called Wanda (1988). Michael Palin, whose father stutters and also created ‘The Michael Palin Centre For Stammering Children’, plays Ken Pile. Early in the film, he is confronted with Otto West, a severe bully who mocks Ken. Observe Otto’s reaction to Ken’s stutter. It is an example of what is commonly referred to as ‘The Face’: people being taken aback by a stutter. Nevertheless, a fish called Wanda is actually an interesting film concerning stuttering. While Otto does bully Ken, by for example finishing sentences or imitation, it is revealed that he uses the defects of others to mask his own.

The Face: stills from A Fish Called Wanda (left) and My Cousin Vinny (right)

Conclusion: the advent of positivity

While the international stuttering community advocates for awareness and a more positive view of stuttering, cinema is not always on board with that ideal. Different examples of (problematic) portrayals have been shown, which show stuttering characters to be untrustworthy, incompetent or annoying. While cinema is not reality, these stereotypes can spread and hurt PWS. Luckily, in the last decade we have seen some examples of positive portrayal.

Most films use stuttering to signal a flaw in character, but some exceptions use it to signal strength. In The Waterboy (1999) a shy, isolated boy uses his frustrations, originating from interrupted speech, to strengthen himself on the football field. By finding confidence and growing as a person, he becomes the star of the film. Similarly, in The King’s Speech (2010), we see King George VI struggling with his speech, only to transcend it. David Seidler, the screenwriter, stuttered. It was not a story about a character to whom the stuttering was added in for plot reasons, but a story about someone whose stutter has been with him his whole life. Someone who would prefer the real war of the day above his own personal one. When George watches Hitler’s speech, his daughter asks: ‘Dad, what does he say?’ To which George replies: ‘I don’t know, but he says it rather well.’ A fitting argument for the case that good speakers do not necessarily make good people. Confronted with such a well-spoken rival, George does not only manage to become a voice of the nation, but also a ‘symbol of nation resistance.’

Once Upon a Time in Hollywood (2019) showed protagonist Rick Dalton with a slight stutter. There is no reason or hidden agenda for Rick having a stutter. It is just a natural part of him. In the same way that stuttering is a natural part of us.

Cristobal, L. (2009, August 15). Towards a Notion of Transfluency. Retrieved from https://www.mnsu.edu/comdis/isad12/papers/loriente12.html