It is widely accepted that for therapy to be useful for individuals who stutter, it may address the behavioral aspects of the phenomenon (e.g., stuttering observable characteristics), as well as thoughts, beliefs, and feelings associated with it (Manning & DiLollo, 2018; Yaruss & Quesal, 2004). Current therapeutic approaches promote a community-based model of intervention with the active participation of individuals who stutter and people in the environment such as their families, friends, and partners. Accordingly, as many people as possible should have the knowledge and skills to supportively interact with persons who stutter. Unfortunately, many people in the community, including various helping professionals, have limited knowledge about stuttering and the preferences of people who stutter. This can lead to unintended unsupportive reactions toward people who stutter. One prominent study examined the preferences of adults who stutter (St. Louis et al., 2017), but research is limited on preferences of children who stutter.

The aim of this paper is to present the point of view of children who stutter and their parents on how society can behave in a more supportive way when interacting with them. This will be done by briefly reporting the findings of an international research project conducted among American and European children who stutter and their parents. The direct inspiration for this article was a conversation between this paper’s first author and a teenager after a seminar during which these research results were presented. The young man stated that he agrees that it should also be his task and role to share this information. In his opinion, children whose rights and needs are respected are more prone to become adults who create a society of sensitive, empathetic, and wise people. He admitted that he is passionate and ready to spread current knowledge on stuttering. However, he added: “having easy access to the findings of this study in a place that is reliable and widely respected would be very helpful for me.”

For decades, speech-language pathologists (SLPs) and other specialists who support people who stutter have presented lists of DOs and DON’Ts of what to do or say when interacting with a child or adult. However, St. Louis and colleagues (2017) pointed out that these materials were not based on evidence, even if prepared by individuals who stutter. To fill this gap, research with the use of the Personal Appraisal of Support for Stuttering – PASS/Adult was undertaken in the US and Canada (St. Louis et al., 2017) and then replicated in Europe and the Middle East (St. Louis et al., 2019). The research project featured in this article was an extension of these earlier explorations conducted among adults. This time, an international team of researchers from the USA (M. Weidner, K. St. Louis, K. Scaler-Scott, C. Coleman), Norway (H. Sønsterud, S. Skogdal, K. Åmodt), Poland (K. Węsierska), and Slovakia (H. Laciková) were involved in this study. Children who stutter and their parents from Poland, Slovakia, Norway and the USA were asked to complete the child and parent versions of the PASS questionnaire (St. Louis & Weidner, 2015ab). This mixed-methods study sought to investigate the perceptions of supportive or non-supportive actions or responses from others and to compare results across groups. Children and their parents completed the child or parent version of the PASS-Ch or PASS-P in their native language. Both versions include 37 items which measure respondents’ perceptions related to degree of helpfulness of others’ responses (e.g., finish my words, feel sorry for me) and the amount of help the child has received from various people or groups (e.g., teachers, classmates). Responses are rated on a 1-5 Likert scale, with higher values reflecting higher levels of perceived support. In addition, both versions include open-ended questions to provide qualitative data relative to children’s and parents’ lived experiences. A total of 422 participants (151 children and 271 parents) completed the survey from Poland, Slovakia, and the USA, and 11 Norwegian participants completed the semi-structured interview. The average age of child respondents was 10.9 years, and most children had at least one year of stuttering therapy.

Based on the survey data, the top three most helpful and unhelpful listener supports, as reported by children and parent groups, were extracted. For a group of children, the three most supportive behaviors were: “be patient,” “maintain normal eye contact,” and “include me.” While in the group of parents it was: “be patient,” “know how to react,” and “maintain eye contact.” With regards to the least helpful listeners’ supports, children pointed out: “laugh at me,” “use the term stutterer,” and “ignore me.” The parent group indicated the following responses: “laugh at my child,” “finish my child’s words,” and “pity my child.”  In addition to the very helpful and unhelpful supports, the items in the neutral range should be also taken into account. For the children’s group these were: “think about what I want to say” and “slow down,” while the parents’ group neutral ratings included: “telling my child to use strategies” and “ask how to help my child with his/her stuttering.” It appears that it should be more commonly understood that specific advice given at the moment of stuttering is highly variable and individualized. Another interesting finding from this study is that parents and children in all of the countries rated SLPs and parents as the most supportive groups. Moreover, the children’s group identified people talking about their stuttering on television, YouTube, social media, the Internet, etc. and their classmates as the least helpful sources of support. The parents’ group identified classmates as being the least supportive group. Preliminary qualitative results from six Norwegian children (6 boys) and five parents (2 fathers; 3 mothers) supported the quantitative results. Overarching themes pertaining to helpful listener supports include: patience, acting normally, and fostering a positive environment to talk openly about stuttering.  Little variability existed in the rank-ordering of most and least helpful listener supports. However, other variables such as giving advice on what to do and how to feel, asking questions about stuttering, and meeting other people who stutter were highly diverse. Based on this study, there is strong evidence of several universal “dos and don’ts” when talking to children who stutter, but preferences have to be individualized. Future replication studies in various countries will be important to confirm these findings. Based on results from this study, we advance this summary statement, which is adapted from similar work with adults by St. Louis et al. (2017, p. 10):

When interacting with a child who stutters, be patient and friendly, while maintaining natural eye contact and body language. Focus on the content of the child’s message, not whether it was fluent. Avoid finishing the child’s sentences or providing unsolicited recommendations. Be mindful that seemingly well-intended comments (e.g., telling the child to “slow down” or “think about what you want to say”) or actions (e.g. making a joke about stuttering) can often be undesired or unhelpful. Children who stutter will have individual preferences for responses they feel are helpful. It is important to establish a trusting relationship and talk openly with each individual to identify those preferences, so they can receive maximal support from those with whom they communicate.

Taking into account the study findings, it seems that three issues should be highlighted. On the one hand, considering how important parents are as a source of support, they should be empowered. Also, they should be aware that they are the children’s most important advocates. It is important that they believe in their strength and have the power to educate others. In turn, understanding the highly individualized nature of children’s preferences informs us – professionals (SLPs and teachers) – that we should listen to them and ask them how they want us to be supportive listeners. With this in mind, the Norwegian-Polish team created guidelines and preventive materials to disseminate this study findings. It was possible thanks to the grant project ‘Dialog without barriers – LOGOLab.’ This project has been implemented jointly by the University of Silesia in Poland, the Agere Aude Foundation and the Arctic University of Norway in Tromsø. As part of this project, various intellectual results were created, one of them was evidence-based guidelines on how to interact in the most supportive way with children who stutter. These guidelines are available in English and Polish on the LOGOLab grant website. The Norwegian-Polish team (K. Åmodt, T. Anderson, A. Boroń, I. Michta, M. Pakura, A. Sakwerda, S. Skogdal, H. Sønsterud, and K. Węsierska, supported by M. Weidner and K. O. St. Louis) developed a preventive poster and a leaflet to make the contents more accessible and user-friendly. 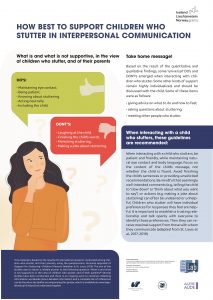 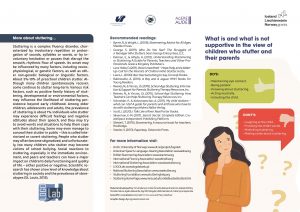 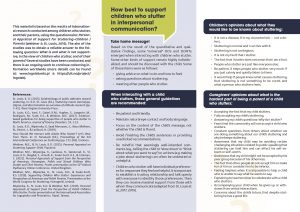 All these materials in both versions (English and Polish) are available in open access on the LOGOLab website.  The authors would be delighted to make these available in other languages. We welcome anyone wishing to translate the poster or leaflet to another language to contact Katarzyna Węsierska.

The authors are convinced that it is time for change. It is time for the general public worldwide to know that stuttering is ‘whatever people who stutter feel their own stuttering to be’ (Shapiro, 2011), and that people who stutter have the same rights as the rest of society. It is time for communities to change and to break down barriers to communication when interacting with individuals who stutter. This must be done by listening and learning in a greater sense from them. It is also time for SLPs and teachers to implement their ideas and individual wishes in the therapeutic processes or in the educational settings. Last but not least, it is time for children who stutter and their parents to be given more space for the choices they make, that they should trust their intuition so that they can confidently speak the changes they wish to see!