The association Overcome Stuttering is the only association in Mali that deals with stuttering in Mali. It has been carrying out awareness activities with children and students who stutter for about ten years. There is no statistical data for stuttering. This is why we applied for, and obtained funding from the European Union to conduct a study to identify people who stutter in nursery and basic schools, in order to bring about a change in mentality and behavior for a better management of stuttering. This study could influence the authorities of the country and other decision makers to accompany us for a better management of stuttering, and bring a change of behavior and mentality towards people affected by stuttering.

Stuttering is generally perceived as a speech disorder characterized by repetitions of syllables, prolongations of the simple area to the sentence, silent or plausible blocks or pauses and or other speech anomalies. Stuttering affects the whole person, it is a combination of speech, behavior and communication disorder.

This disability, which is little considered as such by many people, is present in many families and silently rots the existence of many people.

Faced with this situation of generalized neglect, people who stutter have organized themselves into an association called: Association Vaincre le Bégaiement (AVB). This association militates for a better management of stuttering and language and communication disorders in order to ensure a harmonious development of any person affected by this handicap. In this context, the AVB has received funding from PAOSC II in order to understand the burden of stuttering in the communes III and V of the District of Bamako in the school environment.

To improve the living conditions of people who stutter in Communes III and V of the district of Bamako.

To achieve the objectives of this study, the following phases were necessary:

2.2. The preparatory phase of the mission

This phase of the study involved a few important steps.

2.2.1. Meeting to understand the mandate

At this stage, the consultant proceeded with a review of the Terms of Reference with the members of the association in order to better exchange on the scope of the study and all the issues at stake. This step allowed the two parties to harmonize their points of view with regard to the various concepts, both in terms of objectives and expected results.

This consisted of using all available documents related to the mission.

2.2.3. Design and validation of collection tools

The collection tools used were questionnaires : one for the basic schools and one for the kindergartens.

This was done in close collaboration with the association. Data collection was done in 11 kindergartens and 60 basic schools (including school groups), which is equivalent to 120 schools.

Information was collected in basic schools and kindergartens through individual interviews and discussions with teachers.

Data processing was done after the information was collected.

The data processing resulted in the production of the report.

3.2. At the basic school and garden level

3.3. Types of stuttering in schools

a) In commune III 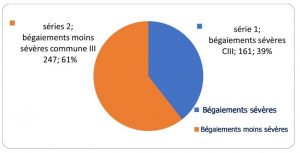 b) In commune V

In commune V 42% of the stutterers are severe and against 58% of less severe stutterers. This analysis is made on 22.681 students. 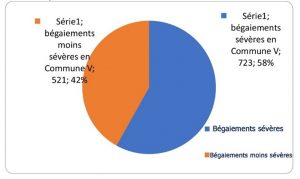 People who stutter encounter several problems at both the school and community levels.

– At the school level

Stuttering is part of the reason why most children who stutter fail in school. Students who stutter have difficulty actively participating in class by speaking up like their peers. They are often ashamed to speak and are teased by their peers. Stuttering leads to feelings of shame, humiliation, isolation, mockery and suffering on a daily basis. This situation forces many children to drop out of school.

– At the social level

People who suffer from stuttering experience enormous difficulties in social, professional and economic integration. People who stutter face daily negative attitudes from people in the community in which they live. In addition, parents rarely display positive attitudes toward these children. Peers provoke them and make them extremely nervous.

In general, people who stutter are not included in their disability.

Stuttering is not considered a disability by families and local authorities alike. This lack of knowledge means that few people are interested in this disorder. None of the two town halls, no academy takes into account this handicap. Only the Association Vaincre le Bégaiement (Overcoming Stuttering) fights to advance the debate on the possibility of taking into account the concerns of people who stutter in the national development program in general and specifically in the PDSEC of the communes III and V of the district of Bamako like other disabled people. And also in the development programs and projects of technical and financial partners.

Stuttering is very present in our communities. Among the many disabilities that exist, stuttering is the least known and the least taken care of. Its management is difficult because there are very few speech therapists, only 3 graduates of the school of auxiliaries of Togo on the whole territory.

The study showed that 2.99% of the students surveyed are stutterers and that 25% of stutterers are severe cases. This situation could worsen with demographics. Stuttering is not taken into account by the education services nor by the authorities.  It has a negative impact on children’s schooling and on their daily lives. Teachers do not know how to deal with a student who stutters. Parents do not know where to turn and even if they do, few can afford the services of a speech therapist.

To improve the situation of people who stutter and alleviate their suffering, the study recommends

That parents and the whole community be sensitized so that they consider stuttering as a social handicap and as a public health priority :